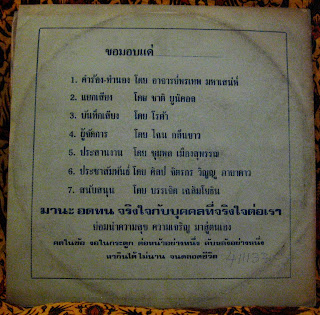 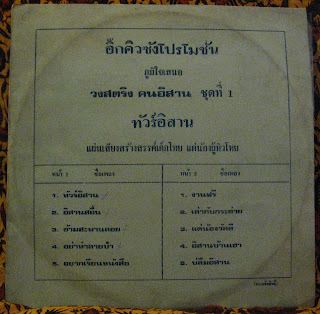 I purchased this mildly strange album in Bangkok from one of those old record shops that cluster around the same city block (if i remember correctly the street's near chinatown, but it's a large city and it's been awhile.) The music is basically ten pop songs with (what sounds like) children doing the singing over a groovin' 80s backup band. Their influences are awkwardly obvious at times (Giorgio Moroder, Santana, etc.), but they still rock out in earnest. The weird thing is that it's always the kids singing. Perhaps they won a talent contest or something. It's probably all explained on the record sleeve - in Thai. Just so you have an idea of what you're getting into, here's a single tune to digest.

wow, pretty interesting record indeed!
the songs are about isan, and i think it's a school group, as their teacher is listed on the back in the incidentals. there have been a couple of children's pop groups to become successful in thailand, for instance เยาวชนกลุ่มแสงเทียน (yaowachon klum saengthian). the album is called ทัวร์อีสาน (tour isan) and the group is called วงสตริง คนอีสาน (wong string khon isan) "string" being the name given to very western-style pop. however, i notice a couple of borrowed melodies from luk thung hits on here as well. the label also reads "อิ๊กคิวซังโปรโมชัน" or "ikkyu-san promotion", a reference to a popular japanese anime about a little buddhist monk... no idea how this relates! thanks for sharing these all these curious obscure records you manage to come across!

& on a related note, have you seen that record at madrotter by rhoma irama's daughter debby? it's here, very cool

hey peter! i was hoping you'd check this one out. as always thank you for the knowledge. this record has befuddled me from the 1st listen, but it does seem carry some purpose. that madrotter post is awesome!