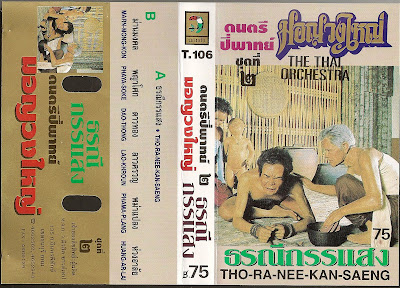 Thai museum aficionados may recognize the image that's on the cover of this tape. It comes from the Thai Human Imagery Museum. Located on the outskirts of Bangkok, this is THE place in Thailand to see uncanny fibreglass human replicas. The online caption for the scene depicted on the tape cover reads:

Slavery in Thailand existed as early as in the Ayuthaya Period. It was accepted as a way of life at all levels of society. Slaves were considered an asset of the master and classified into 7 categories, one category being babies born of slave parents. The old law stipulated that slaves could not gain their freedom until they paid their prices. If they fled for their freedom they would be executed.

I have no idea how the history of Thai slavery relates to the music on this tape (if directly at all) but after a number of listens I have to say that the overall vibe of sorrow and grief seems perfectly fitting. The instrumental title track that takes up all of side A is an epic in mournful form cycles. The B side is also all instrumental, containing a half-dozen tracks that further evoke the heavy feelings. I'd say "enjoy!" but it's not quite appropriate... so, here you go...

thanks for these. good work here

man, thanks a lot for all the great music, very enlightening. Your blog is really great, just got to it and having a great time.

Could yo please repost:

Thank you very much.

ben & josé you're welcome! thanks for listening!