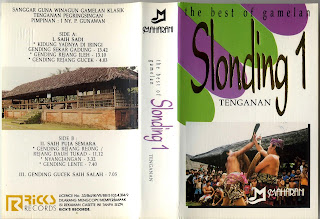 Totally beautiful tape of the ancient and deeply revered gamelan slonding - also spelled selonding, selundeng, etc. - considered probably to be the oldest known type of Balinese gamelan ensemble, predating the gamelan gambuh. Something else that distinguishes slonding is that it's the gamelan most commonly associated with the present day Bali Aga, original Balinese whose history is one of mystery and geographic isolation. Not unlike how a possessed record collector behaves towards his most precious piece of vinyl, the Bali Aga village of Tengana kept their gamelan slonding secluded away for centuries, only bringing the instruments out for the most important of religious rituals. People couldn't even look at the gamelan without an elaborate ritual undertaken to protect the purity of the instruments. It wasn't until the last few decades that the village made the quite controversial decision to allow the gamelan to be recorded. I wonder what changed their mind? It all seems a little arbitrary. Whatever happened - we can only be grateful - the music is amazing. There's a quality to the sound that's delicate yet enduring - a rippling, shimmering sentiment passed down from antiquity.

In 1990 I visited Tenganan with my sister. I took a casette along with a composition by Gutama, played my group, the Banjar Gruppe Berlin. It uses the Selonding melody 'Sekar Gadung' as its basis. By typically Indonesian coincidence, we soon met one of the leading musicians. He took us to his house, a dark hut with earthen floor, I played him the casette. An ancient aunt with arms like matchsticks recognized the tune, she stood up and started to dance. Later he took me to where the practice instruments were kept, and we played. Villagers gathered to watch, complete with blaring radio, no one minded. Later I bought the 2 casettes of Slonding music, and treasured them for years. My favorite piece of course was the sekar gadung with the amazing women's singing, a unique musical experience. I kept lending the casette, it got lost, came back, several times. Yesterday I gave up in despair, it seemed to be gone for ever. Youtube, zero. Then I found the music on your page. You will get to Nirvana quicker for this. Thankyou for ever! An

ps, in case you don't already know it, there are some valuable film-recordings of selonding on http://www.iwf.de/iwf/
and quite a few more very worth seeing/hearing. Sepik flute players, central sudanese (Dangaleat), Oku ceremonies from Cameroon etc. Not to be missed.
Greetings, An Soegijo

Hi An,
You are welcome, and dear thanks for the kind words, links to the film recordings, and especially for sharing your very cool Tenganan memories....I can easily picture the old auntie dancing away to the music.

Aside from the slonding cassette featured in the post, I have only one other album of slonding....it's a CD from the Maharani/Ricks label. It contains some of the same tracks found on the cassette, but has better sound fidelity. If you would like to check it out, I've uploaded it here:
http://www.mediafire.com/download.php?hmjhienwzza

Thanks again for your words and checking out the blog. It's very meaningful for me knowing that this music is finding it's way to listeners like yourself...my brain is effectively goreng.
cheers!

Dear matt and An Soegijo,

Many thanks for this! To return the gift, I recorded what must have been the Tenganan slonding at a private ceremony in Ubud in 2006 - the stereo mp3 @ 320 recording should be going up soon at knowyourconjurer.blogspot.com under the title Trance Bali 2006 (which gives links to this braingoreng post). In the meanwhile, you can hear the Tenganan slonding doing the same melodies I recorded - but fifty years ago, here: http://holywarbles.blogspot.com/2010/05/gamelans-de-bali-collection-du-musee-de.html

As promised in an earlier comment, here is the Tenganan slonding recorded in 2006:

Thank you to all the posters for this great music - inspiring me to get some content out there myself!