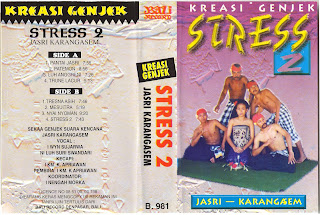 Music for drinking, singing, and joyful abandon. Genjek is a fairly recent creation of the past few decades. Originating from the north/northeast of Bali, it's now become popular over much of the island. The name comes from the word 'gonjok' meaning 'joke'. Vital to any successful genjek session is tuak - a sweet & sour, milky wine beverage made from cocoanut palm flower. Potent and acidic, tuak is usually served from plastic jugs and consumed at room temperature (which, being the tropics, is not much colder than ones' own body temperature). Often there's some inadvertent dead ant garnish floating in the swill. Similar to drunkenness and punk rock, it's said that the more tuak consumed the better the genjek song. Listening to this tape and not intending any criticism, it does sound like the musician's are more pleasantly buzzed than wasted; it would be pretty tough to keep it together as well as they do if they were completely trashed! Besides, there's a lady singing and she wouldn't imbibe with the fellas.

The B Side seams to be corrupt?

Anyway, Thanks for all your uploads! Keep up the good work!

thanks for the kind words!

i've re-posted this one - seems ok now. let me know how it goes.

Its great that its possible to find it in the web ) Do you know if somewhere is possible to listen to genjek stress "jele goba jele ati? " ))) I am looking for it for a long time )